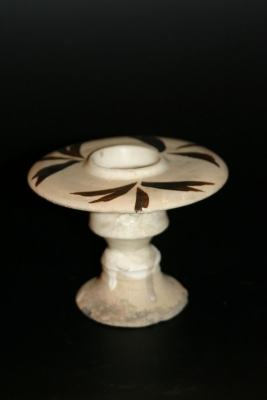 A Cizhou ware tazza-shaped oil lamp with a wide collar and a spreading foot. The coarse brownish body is covered with a white slip over which a transparent glaze has been applied. The collar is decorated with an abstract leaf pattern in iron-brown. The foot and interior of the oil lamp are unglazed.

Chizou-type wares were made all over north China, particularly in the provinces of Hebei, Henan, Shaanxi, Shanxi and Shandong. The term 'Chizou-type' is used for most Northern Song and Jin dynasty stonewares covered with a white slip that is at least partly visible through a transparent glaze, thus forming part of the decorative scheme. Although some killns began making wares of this type in the late Tang dynasty (9th century), and other were active until the Ming (1368 - 1644), the finest pieces date from the 11th and 12th centuries.
Most Chizou-type wares are inventively decorated in a great variety of styles. The designs are generally colourless and play on contrasts of black-and-white or similar light-and-dark tones. Two basic groups can be distinguished, those with motifs incised, stamped or carved into the slip, and those with painted designs, the former slightly predating the latter.
Generally speaking more delicate and painterly designs were achieved by painting a dark brown or black pigment derived from iron on the white slip with a brush before the transparent glaze was applied. This technique, which was used both for bold, simple and quickly sketched calligraphic designs and for narrative scenes, was popular during the Jin dynasty.

A blue-and-white dish with deer design

A set of six porcelain Japanese cup and saucers