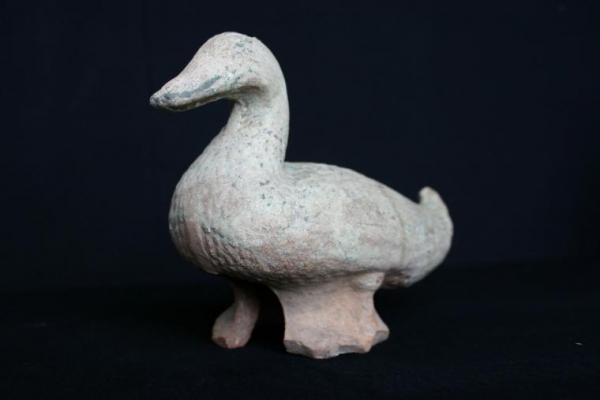 A glazed pottery figure of a duck. The duck is moulded in two halves with its legs turned into a simple stand. The green glazed figure has a red earthenware body, with some iridescence.

Tomb figures were intended to provide protection and comfort for the deceased. They included courtiers for company, servants for assistance, entertainers for pleasure and - particularly in the tumultuous period after the Han - a large number of armed and armoured soldiers as guardians. Animal figures represent both domesticated creatures, such as horses, watch-dogs, geese, ducks and chickens, and mythical ones, including fabulous horned beasts. While large figures of courtiers and horses made of painted pottery are characteristic of Western Han tombs, those of Eastern Han more often contained groups of smaller, green-glazed figures.

a pair of Chinese wine pots

A porcelain sculpture of the laughing twins famille rose Chi...

A pair of white cows with milkers in Dutch delftware