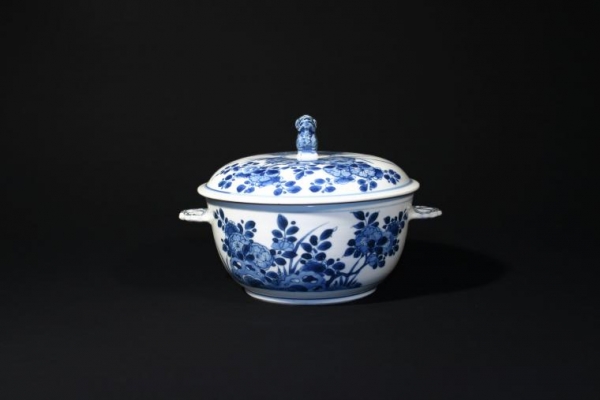 A blue-and-white Chine de Commande terrine with cover. On the rim of the bowl two flat, pierced biscuit handles in the shape of half chrystanthemums. Low domed lid in the shape of a lion. Both bowl and lid are decorated with floral motifs.

Chinese porcelain with either a European shape or Western decorations is called 'Chine de Commande'. Producing porcelain after models to the needs and taste of foreign customers was no novelty for the Chinese potters. Since the 14th century they had been making all kinds of special objects for the Persian, Indian, South-East Asian and other markets. In the 16th century, Portuguese merchants were the first to ask for porcelain in Western shapes. The dutch soon took over this trade, and in the 17th and 18th centuries, Europeans became such important clients that several kilns in Jindezhen came to specialize in 'Western' wares, probably making nothing else.