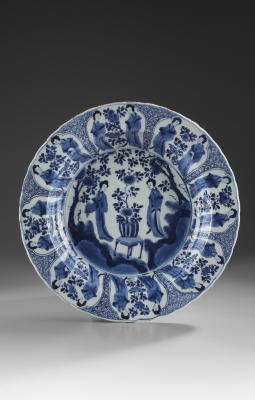 The term “Long Elizas” derives from the Dutch term for long slender ladies on porcelain called “Lange Lijzen”. Chinese trade porcelain of the late seventeenth and early eighteenth century decorated with “Long Elizas”, was particularly popular in the Netherlands. The term was already used in eighteenth century auction catalogues of Dutch private collections to specify this particular decoration on porcelain.

In 1878, the artist James Whistler wrote and illustrated “A Catalogue of Blue and White Nankin Porcelain Forming the Collection of Sir Henry Thompson”. A large portion of this collection consisted of wares decorated with “Long Elizas”. Whistler was also an avid collector of such wares and rivalled with his friend Dante Gabriel Rossetti to see who could amass the greatest number and rarest examples of blue and white china. It seems that Whistler was the first to translate the term from Dutch to “Long Elizas”, a name in which Rossetti’s brother thought “possibly a witticism of Whistler’s may be detected” .

It is rare to find Chinese porcelains destined for export to be marked with reign marks of the period in which the item was produced, as these were generally reserved for use at the Imperial court. 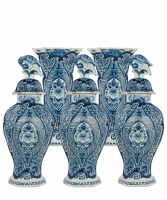