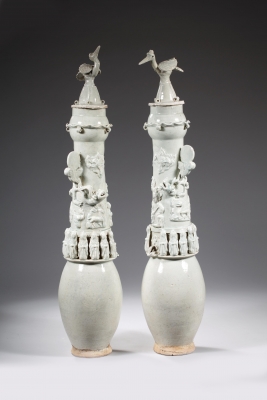 A pair of Chinese porcelain vases with light blue yingqing or qingbai glaze with dragons around the neck.

These kind of vases are found with rice and grain inside.

Yingqing ware (also known as Qingbai ware) is Chinese porcelain, primarily from the Song Dynasty, made in the vicinity of Jingdezhen in Jiangxi, and also in Hebei. It is known as the first porcelain to be produced in quantity.

It is identified by its distinctive blue-tinted glaze over a white porcelain body. Early production imitated northern white wares in shape and decoration such as Ding wares produced in Hebei province; however, firing in reduction produces the blue tint, as opposed to the more opaque white of the Ding wares. Decoration usually features incised lines in which the glaze pools, or a limited amount of moulding.

For a Qingbai jar of this type at the Victoria and Albert Museum see : Qingbai Ware, Chinese Porcelain of the Song and Yuan Dynasties (Edited by Stacey Pierson, Percival David Foundation. 2002. ISBN 0-7286-0339-X) page 180 item 97. This vase has been given a date of 11th or 12th century, we changed our dating for this type of vase to be in line with Stacey Pierson`s book, but due to the references below, which included objects that are datable, we have now revised our dating back to what it was before.
For a pair of Qingbai jars of this type from a tomb dated to 1227 and another from a tomb dated 1315 see : Chinese Ceramics from Datable Tombs and Some Other Dated Material, A Handbook (J.M. Addis, Sotheby Parke Bernet,1978.ISBN 0-85667-039-1) pages 34 and 36.
For other pairs from datable tombs see : Dated Qingbai Wares of the Song and Yuan Dynasties (Ching Leng Foundation,1998) page 71, item 70. The Song Dynasty pair illustrated can be dated to 1209 and come from Nanchang County, and for other pair dated to 1211 see page 74, Item 76. An example of a later type, from the Yuan Dynasty (Dated to 1293) is illustrated on page 81, item 94. 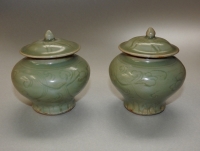 Pair of Chinese celadon stoneware small jars and covers with... 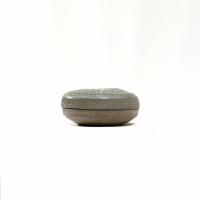 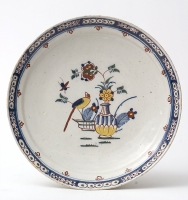