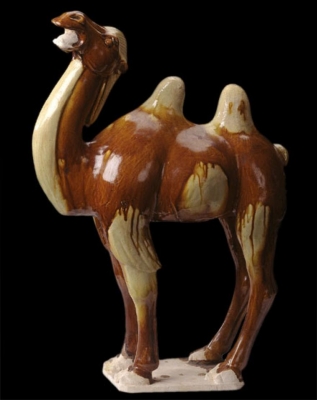 As the successors to the Sui, who had reunited North- and South-China after four centuries of political fragmentation, the Tang dynasty brought a period of prosperity and innovation to China. The Tang dynasty's territory was even greater than that of the Han and its capital, Chang'an, is said to have been the worlds largest city at the time. Initially, the dynasty was very open to foreign influences. There was extensive trade with foreign countries and many merchants settled in China. Renewed exchanges with Indian and Middle Eastern cultures led to a flowering of creativity in various areas. Among these was the introduction of Buddhism. Known in China since the first century ad., the religion was now adopted by the rulers and Chang'an became an important centre for Buddhist thought. In the second half of the ninth century, the Tang dynasty began to decline due to domestic economic instability and military defeat. During the Tang dynasty, all arts flourished: poetry, music, dance, painting, sculpture, calligraphy and pottery. Art and artisans were held in high esteem, but works of art were also more and more integrated in everyday life. Pottery was made for three predominant uses. First and best-known is its use in tombs: the dead were surrounded with everything they might need in the afterlife. Miniature houses, animals, guards, servants, musicians and dancers were created. Secondly, pottery was used for religious ceremonies: bowls, incense burners, candlestick holders etc. Lastly, pottery was used in everyday life: apart from bowls, boxes and food containers, special objects were created for drinking tea and wine. 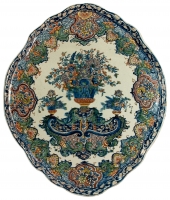 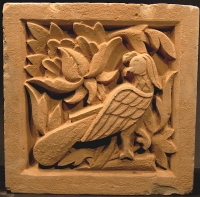