A pottery earth spirit, holding up his right hand and resting on a rectangular base. The figure combines familiar aspects of such guardian figures, such as claws, spikes along the spine and bulging eyes, in an unexpected way. The grey pottery is covered in white slip, with some remains of red pigment.

Figures of this kind were meant to function as tomb-guardians, protecting the grave and the deceased not so much from living tomb-raiders, but from ghosts and evil spirits. The inclusion of fantastic animal guardians as part of the retinue of tomb figures began in the Northern Wei dynasty (A.D. 386-534) and continued into the Tang dynasty. Also called earth spirits, or zhenmushou ("grave-quelling beasts"), these guardian took the form of a fantastic hybrid creature composed of various animal and sometimes human elements and were placed in the tomb in pairs to ward off any malevolent beings who threatened to intrude. 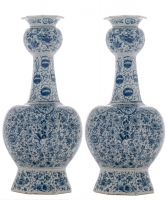