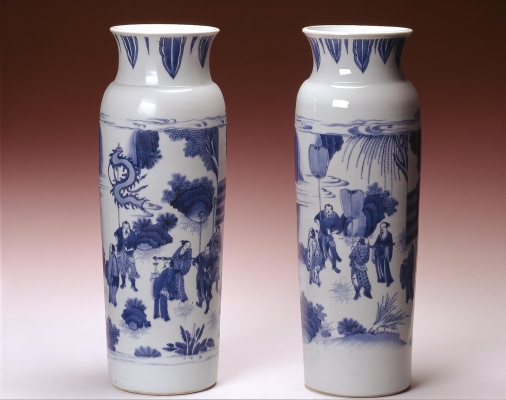 A pair of underglaze blue porcelain vases from the Ming Dynasty.

It is rare to find a perfect pair of Chongzhen Period transitional vases of this quality.

The Transitional Period began in about 1620 (death of the Emperor Wanli), lasted through the change over of the Ming to Qing dynasty in 1644, and extended until the arrival of Zang Yingxuan at the imperial kilns at Jingdezhen. The Period produced a fascinating and wonderful selection of porcelain known as Transitional Ware.

Transitional porcelain is almost completely in the Chinese taste with little foreign flavour to it. Many of the designs depict figures in distinctive landscapes or naturalistic scenes with painting of birds or animals. The designs are often painted against dramatic backdrops of steep walls of cliffs, clouds, and cone shaped mountains or river scenes.

These porcelains are skilfully potted and decorated in a lovely shade of deep blue that inspired the simile "like violets in milk". Mid way through the Period this blue became the inspiration behind the use of finely graded washes of cobalt blue, which were used to great effect. These 'melting' shades of blue became another characteristic of the Period.