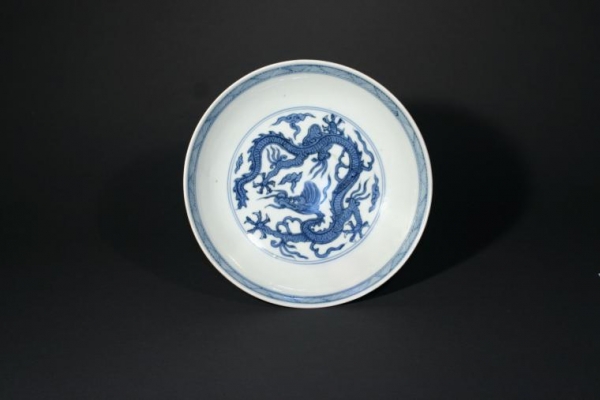 An underglaze blue dish with dragon design, Two similar dragons on the back of the dish. Six Character Wanli mark and of the period.

Chinese dragons are legendary creatures in Chinese mythology and folklore, with mythic counterparts among Japanese, Korean, Vietnamese, Bhutanese, Western and Turkic dragons. In Chinese art, dragons are typically portrayed as long, scaled, serpentine creatures with four legs. In yin and yang terminology, a dragon is yang and complements a yin fenghuang "Chinese phoenix".
In contrast to European dragons, which are considered evil, Chinese dragons traditionally symbolize potent and auspicious powers, particularly control over water, rainfall, and floods. The dragon is also a symbol of power, strength, and good luck.
In Chinese daily language, excellent and outstanding people are compared to the dragon while incapable people with no achievements are compared with other, disesteemed creatures, such as the worm. A number of Chinese proverbs and idioms feature references to the dragon, for example: "Hoping one's son will become a dragon" (望子成龍, i.e. be as a dragon).