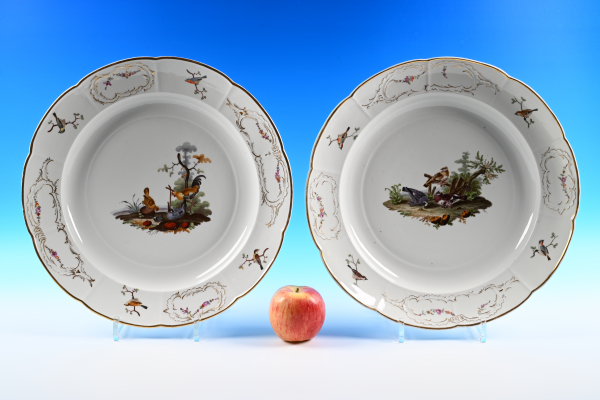 A large pair of Fürstenberg plates

The plates are beautifully painted and with fine gilding.
Duke Hendruk Julius of Brunswick-Wolfenbüttel had the still existing Sloss Fürstenberg built around 1600 on the site of an older castle, in which one of his successors, Charles I of Brunswick-Wolfenbüttel, commissioned Johann Georg von Langen to establish a porcelain factory in 1747. This brought some prosperity to the village, both through employment at the factory and its suppliers, and through improved connections: Among other things, Fürstenberg became an important stagecoach stop..The Fürstenberg porcelain factory is the third oldest producer of porcelain in Germany. The company is still in operation.
Marked on the back.
Germany, second half of the 18th century.