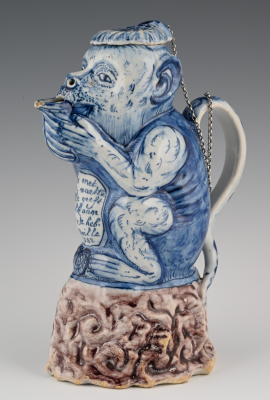 The drinking monkey, sitting on a rock, is a pouring jug.

To fill the jug under the hat there is an hidden opening.

The cup, from which the monkey drinks, serves as a spout.

On the shield on his stomach a verse

The verse tells in a funny way the use of the jug.

Pitchers in the shape of animals have a long tradition.

These Delft monkeys were inspired by similar porcelain jugs from China, from the KangXi period (1662-1722),

No restorations and with original lid. 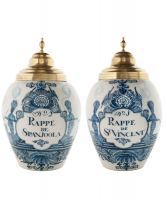 A Pair Tobaccojars in Dutch Delftware