Arguably these Delftware wall-sconces were meant to be in the bedroom. The slightly erotic images of a woman with a little bird and a man with a horn will not have gone misunderstood in the time they were manufactured. The man pipes his horn to lure the bird out of its cage (and into his bed).
The male figure, a hunter with a horn, strongly resembles Willem IV, the Frysian Prince of Orange that became stadtholder in 1747. His image was immensely popular through the second quarter of the 18th century and was often seen on prints, Delftware and tiles. It’s hardly surprising that the painter used a portrait of the Prince in profile for this image of a hunter. 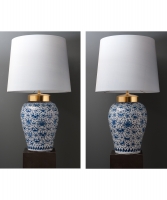 A Near Pair of Dutch Delft Vases with 'Mille Fleurs' ( Lamps... 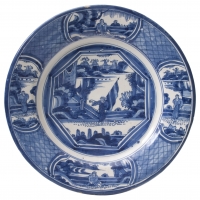