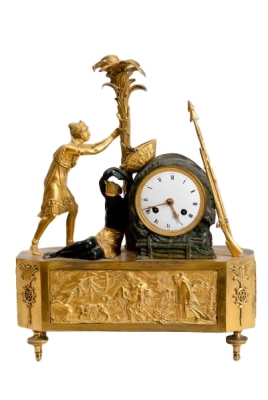 Pendule au bon sauvage ‘Atala liberating Chactas’ Paris, date circa 1820 Height 40 cm, width 32 cm, depth 11 cm. A very fine quality Empire gilt and patinated bronze figural clock depicting the celebrated model of Atala freeing Chactas, the white enamel dial signed à Paris with inner Roman numerals and outer Arabic numerals and a pair of blued steel hands for the hours and minutes. The movement with anchor escapement, silk thread suspension, striking on the hour and half hour, with outside count wheel. The magnificent case with dial drum surmounted by a basket and draped lion pelt supported on a log stack with a spear and gun propped against the right side and on the other the patinated bronze figure of Chactas dressed in a gilt loin cloth and feather headdress seated against a gilded palm tree which he is chained to but which the standing figure of the young Atala, wearing a tasselled robe and braided hair is trying to free him from. The clock and main figures upon an elongated octagonal plinth with central cast frieze showing Chactas carrying Atala in his arms preceded by a dog and followed by a missionary, the angled corners and ends cast with feathered motifs, on toupie feet Literature: Peter Heuer-Klaus Maurice, “European Pendulum Clocks”, 1988, p. 79, illustrating an identical clock case. Pierre Kjellberg, “Encyclopédie de la Pendule Française du Moyen Age au XXe Siècle”, 1997, p. 359, pl. E, illustrating an identical clock case signed on the dial Jérosme Perroncel à Paris. Elke Niehüser, “Die Französische Bronzeuhr, Eine Typologie der Figürlichen Darstellungen”, 1997, p. 144, illustrating a very similar clock case with the addition of a sleeping warrior to the right of the dial and p. 238, pl. 826, illustrating an identical clock case. “Musée François Duesberg” undated catalogue, p. 63, illustrating two identical clock models. Tardy book II, page 436. This wonderful clock case is one of a number that relate to the notion of ‘Le Bon Sauvage’ as evoked by the writings of Jean-Jacques Rousseau. The design for this specific model is based on the celebrated epic ‘Atala’ by François-René de Chateaubriand (1768-1848), first published in 1801. Napoleon, who was determined to effect a reconciliation between Church and State, welcomed the support that it gave to his Concordat and in gratitude appointed Chateaubriand his first secretary at the French Embassy in Rome. The public adored ‘Atala’; between 1801 and 1805 eleven editions appeared and translations were published as far a field as Russia and Hungary. Chateaubriand’s heroine, Atala inspired all forms of the arts, from ballads, paintings, engravings, wax works and as here clock cases. Chateaubriand’s tragic love story revolved around Chactas, a Natchez Indian and Atala, adoptive daughter of the Chief of the Muskogee. The Muskogee were fierce warriors and bitter enemies of the Natchez. During a tribal dispute Chactas was captured, he was tied to a tree but before he was sacrificed Atala came to his rescue. This part of the story is illustrated in the sculptural case above, with the hunters’ weapons beside the clock and his fate, the burning fire surrounding the dial. Once freed Chactas and Atala travelled around North America setting up home with a hermit missionary named Father Aubry. Strongly influenced by the latter and by Atala’s faith, Chactas also converted to Christianity. Atala and Chactas fell in love and though he asked her to marry him she was torn between her heart’s desire and filial love since she had once promised her mother that she would dedicate her life to the service of the Church. So rather than live without consummating her love, Atala took poison; Chactas found her dying in a cave whereupon Atala explained why she could not marry him. “To save my life [at birth] my mother made a vow: she promised the Queen of the Angels that to her, if I escaped death, should be consecrated my virginity….Fatal vow which hurries me to the grave!”. The narrative is then continued on the plaque below; after Atala died, Chactas and the missionary took her out of the cave to be buried and as they did a dog appeared. 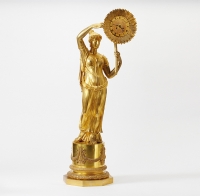