Movement
The fourteen-day movement is driven by a spring barrel. It is regulated by an anchor escapement in combination with a pendulum hung on silk. The movement has a pull quarter repeat on two bells. The white enamelled dial features Roman numerals for the hours and an outer ring indicating the minutes in Arabic numerals. The openwork hour and minute hands are made of gilt bronze. The clock is signed in the centre: “Gallois à Paris”. The enamel is signed and dated on the reverse “Decla •1746•”.

Case
With its asymmetric leaf motifs, this small Louis XV Cartel d’Alcove is a quintessential example of French Rococo. The case incorporates stylised acanthus leaf shapes. A comparable example, published in Encyclopédie de la Pendule Française van Pierre Kjelberg  on page 95, image E, bears a signature on the bronze by Saint Germain. From this, it can be concluded that the bronze case of this Cartel clock should also be by the hand of Jean-Joseph de Saint-Germain (Paris 1719-1791).

Jean-Joseph de Saint-Germain was probably the most renowned Parisian of the mid 18th century. Active as of 1742, he didn’t become a master craftsman until July 1748. He became famous for his many clock and cartel cases, such as his Diana the Huntress (an example is in the Louvre Museum), the clock supported by two Chinamen (a similar example is in the Musée des Arts décoratifs in Lyon), as well as several clocks based on animal themes, including elephant and rhinoceros clocks (an example in the Louvre Museum). In the early 1760’s he played an important role in the renewal of the French decorative arts and the development of the Neo-classical style, an important example of which may be seen in his Genius of Denmark clock, made for Frederic V and based on a model by Augustin Pajou (1765, in the Amalienborg Palace, Copenhagen). Saint-Germain also made several clocks inspired by the theme of Learning, or Study, based on a model by Louis-Félix de La Rue (examples in the Louvre Museum, the Gulbenkian Foundation, Lisbon, and the Metropolitan Museum in New York). Along with his clock cases, Saint-Germain also made bronze furniture mounts, such as fire dogs, wall lights, and candelabra. His entire body of work bears witness to his remarkable skills as a chaser and bronzeworker, as well as to his extraordinary creativity. He retired in 1776. 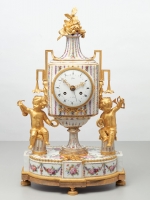 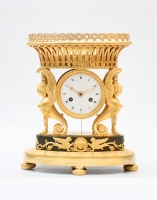 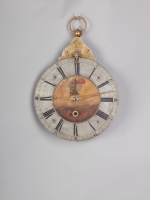