Case
This small Louis XV Cartel is a fine example of the French Rococo style with its asymmetrical foliate motifs including stylized acanthus leaves and flowers.

Clockwork and Dial
The clockwork is driven by a spring barrel and has a two-week going train. It has an anchor escapement, a pendulum with silk suspension and a pull repeat with two bells. The white enamelled dial has an outer chapter ring with Arabic minute and Roman hour divisions. The openwork hour and minute hands are of ormolu bronze. The clock is signed in the centre of the dial and on the reverse: Noël Baltazar à Paris.

Henry-Noël Baltazar came from a family of clockmakers and was appointed maître in Paris in 1717. From 1737, his workshop was situated at the Rue du Roule, moving to the corner of Place Dauphine and Quai des Orfèvres in 1748. Noël’s career was incredibly long, spanning a period of nearly seventy years in which he was granted the title of ‘Horloger de Mesdames’ in 1769. According to specialist Jean-Dominique Augarde’s "Les Ouvriers du Temps", the clockmaker had a permanent stock with remarkable pieces of high value from 1769 until his death in 1786. 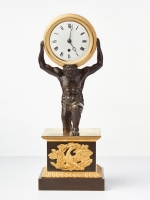