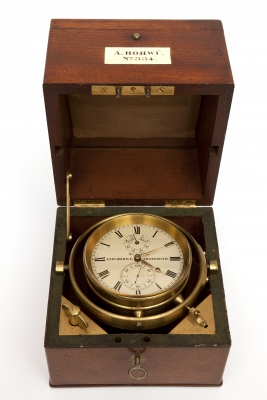 No. 170. Dutch marine chronometer signed and numbered on the dial Andreas Hohwü Amsterdam, No. 334, c. 1860.
The plain three-tier mahogany carrying case is of classic shape in the French tradition. The movement is contained in a gimballed brass bowl, which can be locked from the side by a slide and is accompanied by a Breguet key. The silvered brass dial is of traditional design, with central Roman chapter ring, and up-and-down dial above the middle, indicating the state of winding and below a second ring, both with blued steel hands, the time being indicated by two gold hands. The two day duration, brass plated movement has a single spring barrel, wound from beneath. It has a chain fusee, maintaining power; and an Earnshaw spring-detent escapement with a bimetallic compensation balance and blued steel helical spring. Dimensions 18x16x16 cm.
The maker, Andreas Hohwü, was born in Gravenstein, Schleswig-Holstein in 1803(d. 1885), so he had Danish nationality. He learnt the tricks of the trade from his father, a humble clockmaker. When he was 26 began to work for Kessels, a chronometer maker of Dutch origin, Altona, Hamburg in Germany and later for Maison Breguet in Paris from 1834 to 1839. After this he went to Amsterdam, where he had a business on the Oudeschans and worked as a chronometer maker for the Royal Dutch Navy. He was an outstanding clockmaker who received many prizes and medals.
Price € 14.500,--
Literature.
Mercer, T, Chronometer makers of the World, Malta, 2004, pp.164-165.
Morpurgo, E., Nederlandse klokken- en horlogemakers vanaf 1300. Page 59. 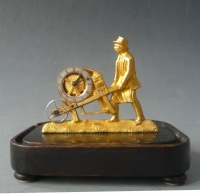 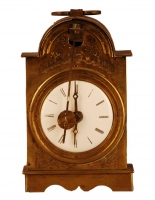 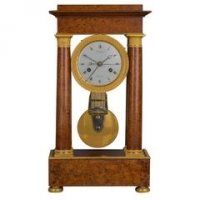 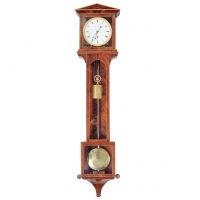