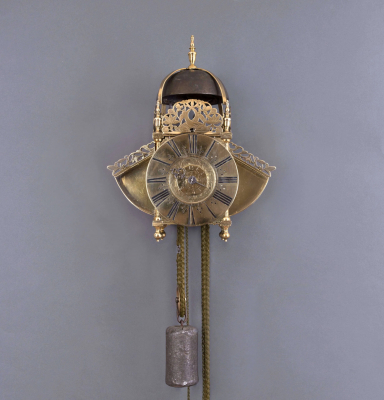 A beautiful English wing lantern clock. On the front of the case, within the chapter ring, the case is decorated with floral motifs. The ferrets are decorated with dolphins.

The overlaid 16.5 cm wide engraved brass chapter ring has Roman numerals, the engraved alarm disc has Arabic numerals. This early lantern has one steel hand. Inside an engraved ring with quarter-hour division between the Roman numerals 1/2 hour motifs. Floral motifs within the chapter ring and worker disc.

This 17th-century English lantern clock has a daytime movement with verge escapement, forward movement and striking mechanism. locking disc on a bell placed above. The alarm clock is placed on the back of the cabinet. The clock has a pendulum that swings between the going and striking mechanism and has an anchor-shaped pendulum lens. Furthermore, the movement is beautifully finished.

On the front of the case, within the chapter ring, the case is decorated with floral motifs. The ferrets are decorated with dolphins. The side frets are not engraved.

The clock is a clear product of what later came to be called the third period 1660-1700. The characteristic ferrets, with so-called "dolphins" that are more like wild whales, are probably all inspired by an engraving by Gesner from the 16th century. The floral motif of tulips is also very characteristic of the third period. During the Commonwealth period (the time when England was a republic) King Charles II had gone into hiding with his sister Mary in The Hague (wife of William II of Orange). His return and the restoration of the throne was accompanied by a renewed revival of appreciation for tulips, as seen on this clock.

Wing lanterns are one of the most popular models of lantern clocks, although not all lantern clocks with a pendulum between the ring and striking mechanism had so-called wings, often it was a recess in the door. Due to the popularity of this model, wings have been added in some cases. Some English writers on lantern clocks even propagate that the wings never existed in the 17th century. However, this is nonsense, because a print by Jan Luyken from the 17th shows just one 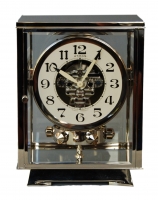