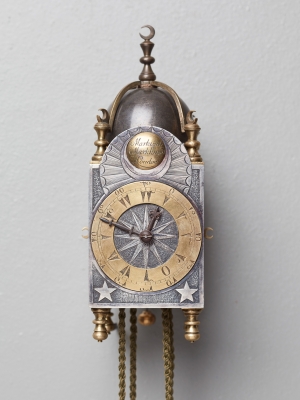 A rare English miniature lantern clock made for the Turkish market by Marwick Markham, circa 1740

This clock was clearly made for export to what we today refer to as the 'Turkish Market', which was then the old Ottoman Empire and included much of the Middle East. Probably  this clock made to order for an important person.The numerals on the chapter ring are derived from classical Arabic. The Ottoman symbols of the crescent and star can be seen on the finials and the dial. Certain makers seem to have had good contacts with the Ottoman Empire and probably the Turkish Market was monopolised by a handful of London makers, including 'Markwick Markham'.