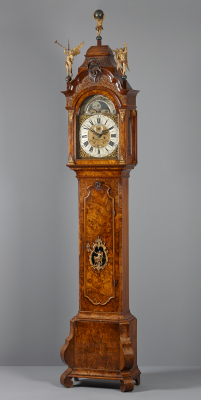 Movement
The movement with half calendar has a going train with an anchor escapement and a running time of eight days. The plates are connected by five pillars. The striking train strikes the full hours on a large bell and the half hours on a small bell, and is equipped with an alarm mechanism.

Dial
The dial with gilt centre and silvered engraved ring displays the hours in Roman numerals and the minutes in Arabic numerals. The numeral ring is flanked at the corners by gilt bronze openwork. A seconds indicator is placed below the XII. Above the VI we find the date indicator. Centrally placed in the arch, we find the moon phase. The clock is signed on the numeral ring: Jan Breukelaar Amsterdam.


Jan Breukelaar was baptised in Amsterdam in 1738 and he died in 1797. His father and brothers worked in Amsterdam (Kattenburg) as ship carpenters. His first workshop was located  at the Grote Kattenburgerstraat. Later on, he moved his workshop to the Oudezijds Achterburgwal.
The family originally came from the Achterhoek and came to Amsterdam in the 17th century. Jan married Hendrikje Vos in 1767 and together they had 14 children, several of whom died at a young age. Two sons, Jan and Nicolaas, also became clockmakers. Nicolaas Breukelaar became a member of the provisional administration of Amsterdam in 1795 and he became Justice of the peace of the second canton.

Case.
The complete front of the case is executed in burr walnut veneer, while the sides of the case are veneered with plain walnut. The base of the case has transversal knees, carried by arched feet. The central part of the case has a door and is equipped with a richly ornamented cartouche shaped lenticle with a central decor of Father Time.
The door that gives access to the dial is flanked by two pilasters with bronze capitals. Next to the movement and on the hood, the case is decorated with openwork. The hood has a sculpted crest and is topped by three gilt wooden figures; Atlas flanked by a winged bugler on the one and Father Time on the other side. 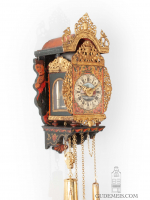 A Frisian polychrome so called 'Stoelschippertje', around 17... 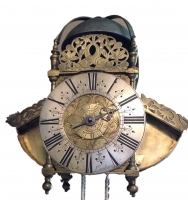