Case
The rectangular base of the case has walnut cross-banding centred by a panel of burr elm framed by fine boxwood and ebony line inlay and it is raised on a double skirt with alternate convex and concave mouldings. The breakarch trunk door is similarly cross-banded and the hood is flanked by brass-capped detached columns which support an entablature which has a pierced walnut sound fret.

Dial
The breakarch brass dial is signed Will. Webster Exchange Alley London on a silvered plaque in the matted centre with calendar aperture and subsidiary seconds ring. The silvered chapter ring has Roman and Arabic numerals with fleur de lys half hour markers. Finely pierced blued steel hour, minute and seconds hands. The arch is centred by a silvered ring indicating STRIKE and SILENT adjustment.

Movement
The very fine quality movement has brass plates with five ring-turned pillars. The delicate five wheel going train has a recoil anchor escapement; The strike train is governed by a steel rack on the front plate and the hours are struck on a horizontal bell positioned above the plates.

William Webster
William Webster was Free of the Clockmakers Company in 1710 (d. 1737) He was a particularly eminent clockmaker, having apprenticed to the great Thomas Tompion and went on to become his journeyman until Tompion died in 1713. At which point Webster set up his own business. An advertisement, appeared in The Englishmen, November 21-24, 1713 and The London Gazette, November 24-28, 1713. On the 20th instant Mr. Thomas Tompion, noted for the making of all sorts of the best Clocks and Watches, departed this life. This is to certify that all persons, whatever quality or distinction. that WILLIAM WEBSTER at the Dyal and Three Crowns in Exchange Alley, London, served his apprenticeship and lived as a Journeyman a considerable time with the said Mr. Tompion, and by his industry and casre is fully acquainted with the secrets of the said Arts. 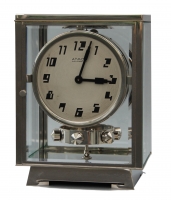 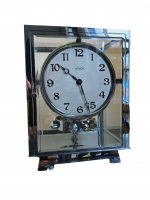