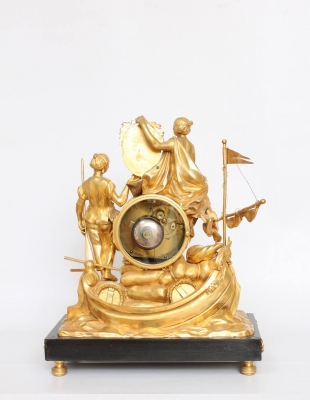 12-cm enamel dial with asymmetrical winding holes signed Le Nepveu A Paris and Roman numerals, finely foliate pierced and engraved gilt hands, 8-day spring driven movement with anchor escapement and silk suspended pendulum, countwheel half hour striking on a bell, fitted in a gilt bronze case on the cargo of a boat, flanked by a personification holding the portrait of Louis XVI, a sailor on the other side, on waves, rectangular ebony base with classical relief mounts raised on turned feet.
The theme of this model which is known as 'Les Corsaires' is the allegory of Louis XVI as protector of the trade and shipping.
The signature probably refers to Nicolas-Antoine Le Nepveu who is recorded working in the rue Salle au Comte (1778- -1789) and the rue Magliore (1789 - 1795). 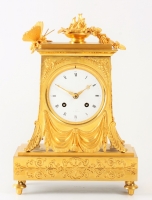 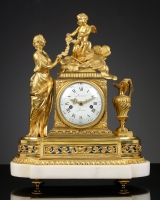