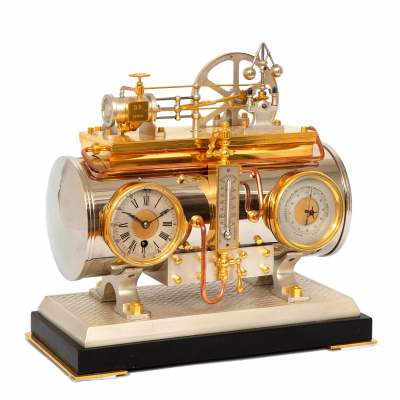 The group of clocks with the subject based on machines, shipping and industry is called ‘industrial clocks’. Their origin could be explained by a growing interest for technical innovations and modernization by an ever growing public in the second half of the 19th Century. And there must have been a growing group of people whose wealth was based on this new industrialization and trade. Often there is much to see also because of the application of thermometers and barometers. The larger examples often have separate mechanisms to power the moving automatons like this clock. Much of the attraction of these clocks must have been to entertain and impress the beholders. The main designer and producer was the firm of Guilmet in Paris.

The beautifully designed boiler is placed on two supports placed on a silvered base with a tile pattern. It is fitted on a black marble plinth raised on flat brass feet. The boiler is surmounted by a fly-wheel with arbors and regulator which is driven by a separate mechanism with a two hour duration. At the front is a thermometer in the middle flanked by the clock dial and aneroid barometer.

The clock movement is driven by a spring barrel and has an eight day duration. It is regulated by a lever escapement in combination with a balance.