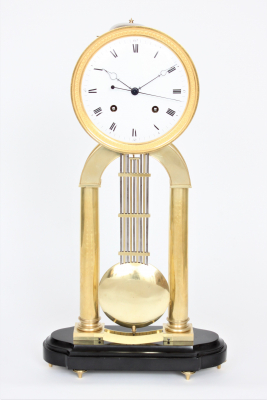 The 15.5-cm enamel dial has Roman numerals and has a finely cast and chiseled ormolu acanthus bezel. The clock has fine blued steel Breguet hands and sweep seconds.

The movement is driven by two spring barrels and has a duration of eight days. It is regulated by y-spoke pinwheel escapement in combination with gridiron pendulum. The sweep seconds ticks half seconds. The clock strikes the hours and half hours by means of a y-spoke countwheel on a bell.

The movement is supported by two arches mounted on two columns. Between the columns there is a arched ‘box’ with a beat plaque inside. The whole is mounted on an oval moulded black marble base raised on six toupee feet.

Hubert Sarton was born in Paris in 1748. He was apprenticed to the famous and skillful Julien Le Roy around 1772. Later in his career he moved to Liège where he became famous mainly for his skeleton regulators. He published a book on clock making in Liège in 1782. He died in 1828. Several very similar clocks are known which are signed by Sarton. There is also a number of features that are signature for his work. The shape of the base. The y-spoke wheels for the escapement and countwheel, the double bent spring for the ratchet and the vertical hammer for the striking all are tell tale for his work. Tardy, Dictionnaire des Horlogers Français, pp. 586 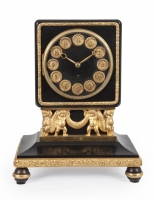 A miniature carriage clock on bronze and cloisonné enamel sc... 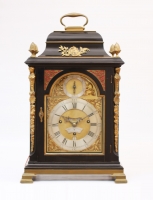