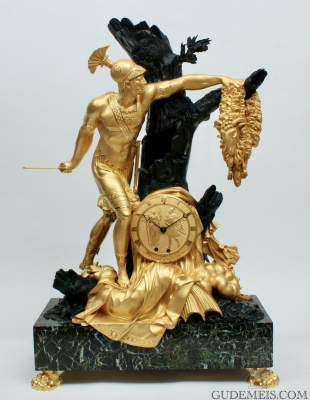 The French movement is driven by two spring barrels and has an eight day duration. It has anchor escapement in combination with a silk suspended pendulum. The clock strikes the hours and half hours on a bell by means of a countwheel.

The outer rim of Jason’s shield is the chapter ring with rpman numerals and is in this way nicely intergated in the design. Just above the VI is the signature LEROY Hger DU ROI. In the centre is a beautiful relief depicting two classical gods. The blued steel hands are of the Breguet type.

We see the well cast and chiseled figure of Jason on the verge of taking the Golden Fleece from the tree. He is standing above the sleeping dragon partly covered by a draped mantle. All the bronze work is extremely well cast and chiseled. The differences in texture between ‘skin’,’clothing’ and ‘hair’ are very well done showing the skill and quality of the chiseler. This is also visible in the differences between the matte and polished gilt parts enlivening the whole beautifully. Finally the realistic posture of Jason is depicted with so much movement that it completes whole wonderfully. The whole is on a rectangular ‘verde antico’ marble base raised on claw feet.

A French Barometer 'Barometre', around 1825 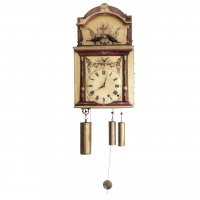