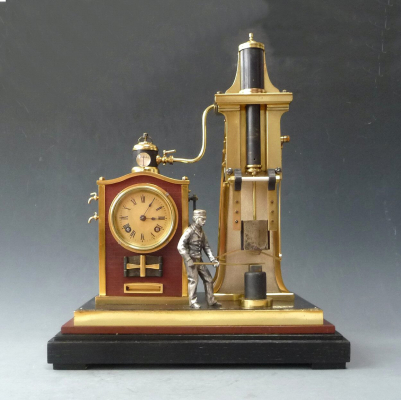 Animated French ‘Industrial Foundryman Clock’, late 19th Century, signed GLT.
Rare antique Industrial foundryman clock of a workman operating a steamhammer.
Movement is stamped on the backplate GLT for Guilmet , made by A.R. Guilmet.
The hammer which is part of the pendulum moves vertically up and down as the clockmovement runs. The pendulum receives it’s propulsion remotely from the clock movement by a series of levers. The clock housing has a copper finish, the industrial clock's base is in two parts: red marble on a black wooden base. Left is the boiler house and to the right the steam hammer. The movement is of 8 day duration and strikes the hours and halves on a gong. A similar clock is depicted on the book cover about clocks by Derek Roberts.
Dimensions: HxWxD 42x36x22,4 cm. Price 25.000,-- 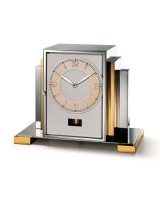