This decorative large mantel clock with a bronze dark green patinated sculpture of Atlas, that towers the heavenly vault with a gilded zodiac, standing on a red marbled base.
Made in Brussel, circa 1860
This pendulum shows a mythological scene about the titanic son Atlas.
Atlas was a titanic son and because of the advanced age of his father, Lapetus  appointed as leader over the titans in the battle of the gods for the universe between Cronus and Zeus.
Unlike his brothers Atlas fought against Zeus.
After a long battle, "titanic battle", the battle was settled in Zeus' favor.
Most of the warriors were thrown into a part of the underworld.
Zeus punished Atlas most severely and sent him to the west (there arose the atlas mountains), where he had to carry the heavenly vault  on his shoulders until the end of time. 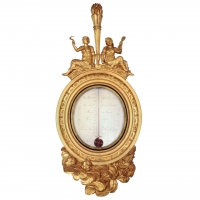