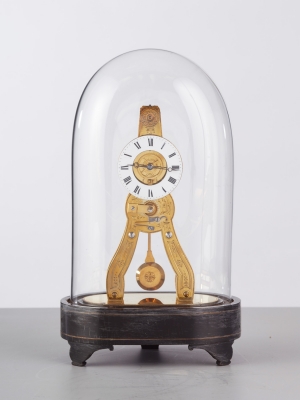 A charming miniature, skeletonised timepiece made for the Grand Exhibition in Paris of 1889.
The lovely and finely engraved bronze skeletonised frame and beautiful matching engraved pendulum make this clock more attractive than the average one - there were many made, but this one is of above average quality. The eight day movement with silk thread suspension.

The height of the clock includes the dome.

The Exposition Universelle (Grand Exhibition) was a world fair held in Paris from May to October 1889. It was held during the year of the 100th anniversary of the storming of the Bastille, a significant event for the French. The Exposition covered an area of nearly one square kilometre in the neighbourhood of the Bastille. 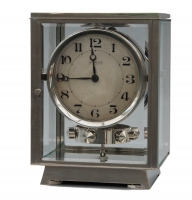