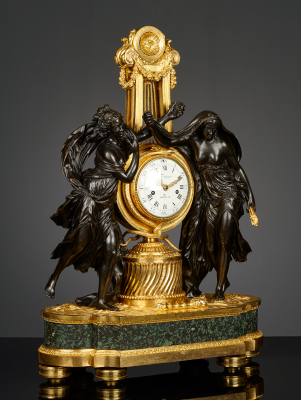 The clock features an eight-day movement with anchor escapement. The striking mechanism on the locking plate strikes the hours and half hours on a single bell. Roman numerals indicate the hours and Arabic figures the minutes. Signed Fettiner Paris on the enamel dial, this signature is repeated on the backplate of the clock. Very little is known about Fettiner but it is believed that he was from Geneva, Switzerland.
The reverse of the enamel dial is signed G. Merlet, referring to Georges-Adrien Merlet (1754-1812). He began his career as an apprentice to Elie Barbezat and was later regarded as one of the greatest enamellers of the late eighteenth century, together with Joseph Coteau and Henri-François Dubuisson.

The gilt-bronze plinth is elegantly moulded at the top and its base and features a body of green “Serpentine” porphyry. Centrally positioned upon a circular gilded bronze pedestal is the lyre-shaped clock case, ending with an effigy of Apollo, the Greek god of the sun. This motif is also repeated on the other side. Two entwined gilt bronze serpents around the dial; this motif is also repeated at the back. The lyre is flanked by two large, patinated bronze draped female figures. Six large flattened feet support the whole below the plinth.

This clock’s decoration scheme represents the theme of Time and the unescapable passage of time. The patinated bronze figures flanking the lyre are therefore the personifications of Day and Night. On the left we see Eos, the ancient Greek goddess of the dawn. Every morning Eos would rise early and fly through the air scattering roses, to guide Helios upwards and prompt him to bring light back to the sky. On the right of the case stands Nyx, the ancient Greek goddess of the night, recognisable by her hooded mantle and the inverted torch with burning flame in her hand. Every evening, she would guide the mists of Erebos to cover the Earth like a dark mantle. From early modernity, Day and Night were perceived as destructive forces because they were constant reminders of the passing of time, which would always ultimately lead to death. Together, Day and Night form an inseparable unity. Before them lies a torch with two flames, symbolising both sides of the light.

The motif of the two entwined serpents around the clock is probably a variation on Ouroboros, in which the ancient allegorical symbol of a serpent eating its own tail represents the concept of eternity and endless return.
Both goddesses are ‘illuminated’ by the light rays of Apollo’s effigy adorning the lyre’s soundbox. Although the mythological literature treats Apollo and Helios as two separate gods, early Roman cults identified them as one entity representing the bringer of light.
From the 1640s, the emblem of the sun god was associated with Louis XIV after he danced as the god Apollo Helios at the Ballet de la Nuit at the age of 14. He was dressed in golden feathers and sunbeams while the other dancers moved around him like the planets around the sun. The image of Louis XIV as the radiant centrepiece, identified with Apollo, became so associated with his kingship that it eventually transcended his reign and remained synonymous with the House of Bourbon until the outbreak of the Revolution.

Porphyry is an igneous rock consisting of large-grained crystals scattered in a compact, fine-grained red, purple or green groundmass. It is a relatively rare rock and was already appreciated and qualified as a precious stone in ancient times. The variety of green porphyry used here, or serpentine, was mined in the Laconia region of Greece. In ancient times the rock was used for the production of vases, moulds, pillars and columns. Many of these objects have withstood the test of time and were fitted with mounts in the 18th century or adapted to a more fashionable shape.

On stylistic grounds, the patinated bronze figures are to be attributed to the Parisian bronzier François Rémond (1747-1812).
François Rémond was admitted as maître fondeur to the Parisian guild of bronze gilders in 1774 and became one of the most prominent and renowned bronzeworkers of his time. He often collaborated with the prominent Marchand-Mercier Dominique Daguerre and delivered numerous decorative pieces to Louis XVI and his family. He not only produced bronze figures, floral ornaments, and urns for clockmakers but is also known to have worked with Pierre Gouthière until 1788 and to have supplied cabinetmakers such as Jean Henri Riesener and David Roentgen with items such as bronzes and furniture mounts. 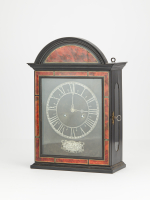