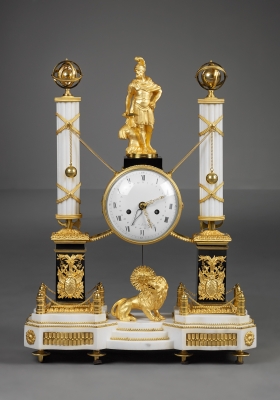 On eight gilt bronze feet a moulded white marble plinth decorated with ormolu rosettes, panels and beaded bands. On the left and right on a slightly higher level and surrounded by ormolu posts, two high black marble bases support two inverted white marble fasces topped by ormolu armillary spheres. Between these bases a seated ormolu lion looks upwards towards the clock above. The clock is suspended from both the black marble bases as from the fasces. On top of the clock, on his own black marble base, an ormolu statuette of the Roman god Mars.

On the clock the white enamel dial shows three rings: the inner one with Arabic numerals for the date, the middle ring with Roman numerals for the hours and the outer ring indicates the minutes. Two pierced gilt brass hands for the hours and minutes and one steel pointer for the dates. The movement with anchor escapement and a duration of eight days. The pendulum disk in the form of an Apollo mask surrounded by the rays of the sun.

The ormolu decorations on the black marble bases consist of war trophies with scaled shields, quivers with arrows, halberds and flags, the whole topped by palm leaves as a symbol of victory. The very unusual inverted fasces are, even more unusual, topped by armillary spheres and moreover flank Mars, the god of war.

If this clock tells us something, it might be this: After the victories of war (trophies and palm leaves), man should bury his arms (inverted fasces) and concentrate on science and arts (the spheres).
After all, this clock was made in the age of reason when the purpose was to advance knowledge by scientific methods. Astronomy was one of the seven liberal arts (sciences) of the Renaisssance and astronomical discoveries concerning the moon, earth and sun were made around 1740-1770. These discoveries were being published by the French Académie des Sciences during the second half of the century.