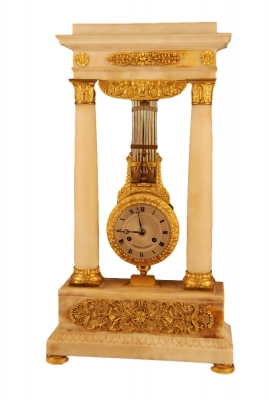 A rare early 19th century marble and ormolu swinging portico clock by Béchot a Paris. The marble two column portico case has tapered columns, finely carved moldings and numerous ormolu mounts that include decorative appliques, stylized capitals and engine-turned bun feet. The clock is housed in the 9-rod gridiron bi-metallic pendulum that has a cast ormolu bob, is suspended via reverse knife-edge and has the fast/slow adjustment in the center. In the center is a steel-cut hand that indicates the degree of compensation. The silvered dial has a center of concentric circles with various decorative engine turning, painted Roman numerals for the hours and signed with 'Béchot à Paris' and two exceptional steel-cut Breguet-style hands. The fourteen-day time and strike movement has a crutch that engages a pin on the back of the ormolu register mount. As the clock runs impulse is directed to the crutch and since the pin is immobile the pendulum with the clock swings side to side. Swinging pendulum clocks had gained popularity in the mid-eighteenth century and continued to be made through the mid 19th century. They ranged both in size and design and like the rest of the decorative arts followed the emerging fashions with this being a particularly refined example. 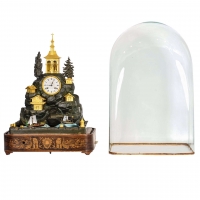 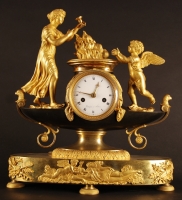