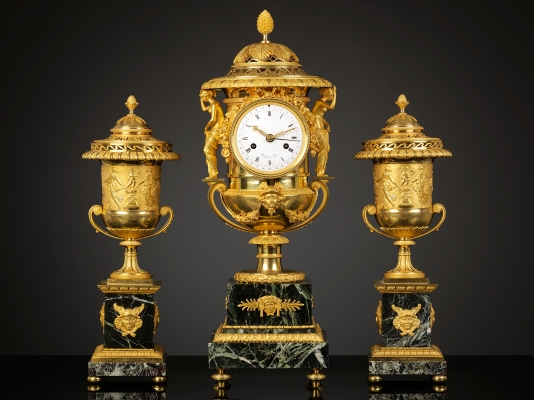 Suite of a French Empire Mantel Clock and two Vases

An exceptionally large and beautiful set of two ornamental vases and a mantel clock, after a model by Thomire, and with a Clockwork by Thonissen.
Clockwork
8-day going train, striking train and central date indication. The white enameled dial shows Roman numerals for the hours and stripers for the minutes. The outer ring indicates the date (1-30) in Arabic numerals.
Thonissen worked from the Rue Mandar from 1806 to 1840.
The mantel clock is shaped like a “de Medici” vase and is flanked by two female figurines “à l ‘antique” who support the lid with their right hand. The, partly openwork, lid is decorated with stylized palmettes and a pine-cone finial. The outside of the dial is decorated with a beaded edge and a garland pending from the top. Underneath the dial the vase has a male portrait with a winged helmet, presumably Mercury or Hermes, flanked by floral garlands. The clock is resting on a double marble plinth with four bun-shaped legs. The pedestal is decorated with portraits flanked by stylized palmettes and an architrave with leaf motifs.
The ornamental vases have the same shape as the mantel clock, but are much simpler in their ornamentation. The body is decorated with a relief of dancing priestesses and putti. A comparable set can be found in the Duesberg Museum in Mons, Belgium.
Pierre-Philippe Thomire (1751-1843) was one of the most famous bronze casters and ciseleurs during the French Empire era. Although trained as a sculptor, Thomire chose to follow in his father’s footsteps, and take up the more lucrative profession of ‘fondeur’. He became the leading bronze artist of the late 18th and early 19th century. Thomire was trained by Gouthière and afterwards founded his own company that manufactured ornamental bronzes for furniture. Later, Thomire became assistant to Duplessis, the director of the Manufacture de Sèvres. After the death of Duplessis in 1783, Thomire turned once again to bronze casting and manufactured bronze fittings for porcelain artefacts. In 1809 Thomire was awarded the title “Ciseleur de l’Empereur”. 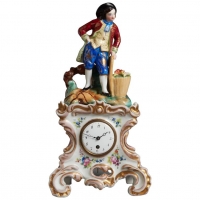 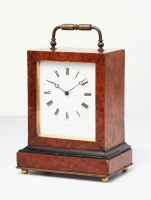