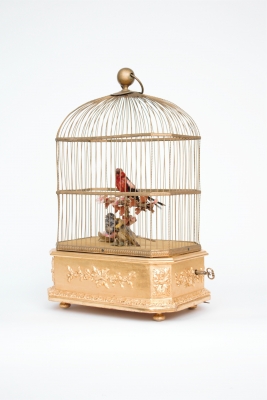 mechanism with three whistling birds moving their heads, beaks and wings, case with gilt wood base

The parcel gilt base has canted corners with applied rosettes and is raised on pear shaped feet. The longer sides have garlands and flowers on them. The cage itself is placed on the base in which there are three mechaical birds. Tow of them are seated on the velvet ground while another is seated on a branch with silk leaves. The case is surmounted by a suspension ring.

The mechanism is driven by a spring barrel which is wound by a key on the side. The mechanism makes the belllows, flutes and birds. The birds moves their beaks, tails and heads while appearing to whistle. There are two different playing positions which are set by a lever. The first is continuous whistling and moving of the birds. The second is a stop/start position. After one of the birds has whistled, the mechanism pauses for about five seconds. After that another bird will start to whistle and the other birds will look at the whistling bird. 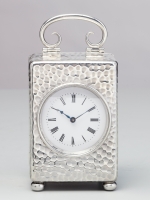 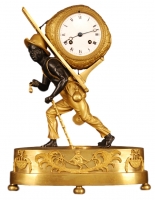 A small English ebonised table clock with moonphase, by Robe...