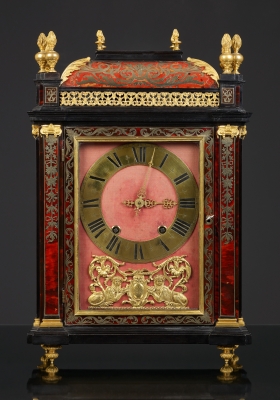 The movement of 14 days duration, with verge escapement. Striking on the hours and half hours. The chapter ring is of gilt brass, like the hands. Signature on the ornament below the chapter ring and on the back: Claude Raillard Paris.
Claude I Raillard , maître-horloger, was between 1662 and 1673 one of the jurors of the Parisian clockmakers guild. He supplied clocks to, amongst others, cardinal Mazarin. Raillard died before 1708.

The ornament below the chapter ring consists of a shield with the signature of Claude Raillard. The shield is supported by two sphinxes with extremely long tails that turn into flowered scrolls.

The ebony case on ormolu feet (pieds à toupie), shows a classic architectonical built-up, with a moulded base and pilasters flanking the glass door on the front. On both the right and the left side of the case, pilasters flank glass panels.
All pilasters have ormolu bases and capitals and show banded panels of tortoiseshell with flowered festoons hanging from a fan-like ornament, all in Boulle-marquetry.
The glass door on the front is decorated in Boulle-marquetry of leafy scrolls.
Above the moulded “architrave” a pierced ormolu frieze supports the rounded off top which shows a decoration of Boulle-marquetry scrolls in tortoiseshell. The top is finished by eight ormolu fiery finials. 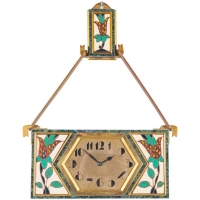