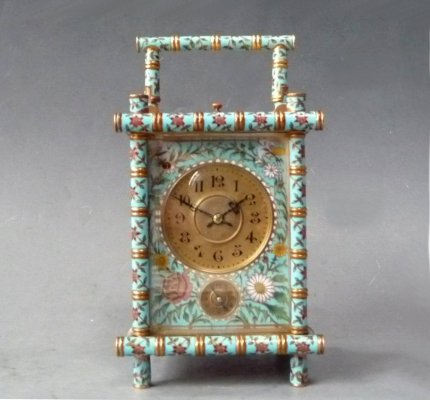 Polychrome painted clock in bamboo style with floral decorations signed on the dial W.Gabus , Moscow. The gilt dial has Arabic numerals, there is a subsidiary dial for the alarm setting. 8-day movement with platform anchor escapement, numbered 2980, hour and half hour striking on a gong with repeating on demand.
Bamboo case carriage clocks became popular in the second half of the 19th Century parallel to the interest in oriental art object and curiosities. Colorful travelling clock in very good condition. HxWxD 16x11x9,5 cm (excluding handle). Price € 12.500,--SOLD

Brief history of W. Gabus.
The clock and watch company W. Gabus was founded in 1868. It opened in Moscow a "Trade House W. Gabus", which later became one of the three largest trading houses in Russia, along with houses Pavel Bure and Henry Moser. Louis William Gabus was born in Switzerland May 6, 1847 in a family of watchmakers. He moved to Russia when he was twenty years old. Perhaps one reason for his visit was because of the successes of fellow countryman Pavel Bure. He became a successful entrepreneur by his thirties.. He often travelled to Switzerland, where he and his brother opened the watch factory in Bern, whose products won at international exhibitions gold medals: in 1893 in Chicago, in 1900 and 1906 in Paris and Milan respectively. Sources: http://history.wgabus.com/