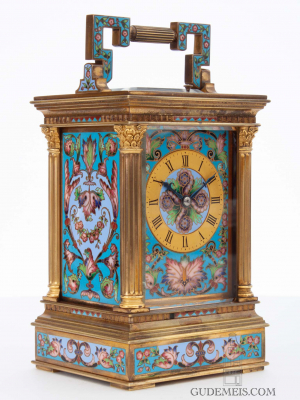 The 7-cm wide polychrome cloisonne enamel dial is adorned with beautiful flowers and a gilt chapter ring with Roman numerals. The hands are made of blued steel.

The movement is driven by two spring barrels and has eight day duration. It is regulated by platform lever escapement in combination with a bi-metallic balans with adjustment screws. The clock strikes the hours and half hours by means of rack striking on a gong. The last hour can be repeated by pushing the button on top of the case. The backplate has the trade mark for Richard & Cie of Paris.

The gilt brass case is throughout adorned with similar cloisonne enamel flowers and scrolls. It is surmounted by a handle and has a beveled glass panel on top showing the escapement. There are fluted columns on all corners with cloisonne enamel panels in between. The case type is called ‘Anglaise’ is characterized by its rectangular handle in combination with the rectangular base. The whole is raised on flat feet. The original travel case is still with the clock.

The makers Lemaître & Bergmann established a firm in 1848 in Paris which opened a branch in London in 1857. The branch became Richard & Co in 1867. They exhibited clocks many exhibitions among which the great exhibition of 1889 in Paris. Lit.; Charles Allix & Peter Bonnert, Carriage clocks and their development, pp. 449.