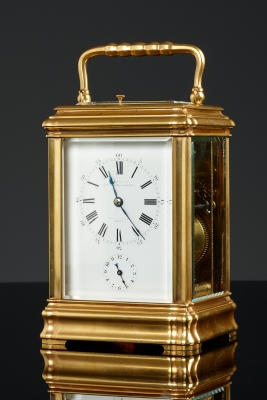 The alarm clock can be set at the bottom with a lever in the positions: Grand Sonnerie / Silence / Petit Sonnerie. On top of the clock there is a button to strike the hours on request.

Charles Oudin (1768 – 1840)
The Oudin family worked as clockmakers for at least three generations. The ancestor, Jean-Baptiste, originates from Clermont-en-Argonne in north-west France. Two of his sons, Nicolas and Charles l’Ainé, also become clockmakers.

Sons of Nicolas and Charles, in their turn, also became clockmakers and ended up working for Bréguet, where the were held in high esteem and worked on several important innovations. The inventions, however, were kept in the name of Bréguet. Nicolas and Charles worked on the most challenging clockworks, particularly the ones with many complications or with time equalization.

Of the two cousins, Charles (1768 – 1840), son of Nicolas, was the most gifted. By exception, he was granted the right to add ‘élève de Bréguet’ (Bréguet’s pupil) to his signature.
In 1797 Oudin marries the sister of the renowned clockmaker Basile-Charles Leroy. In 1801 Oudin opens his own workshop in the Palais Royal. From 1809 onwards he uses the address Palais Royal 52.

Oudin took part in the National Expositions of 1806 and 1819. At the exposition in 1806 he was rewarded a gold medal for a watch that could be wound from the suspension. 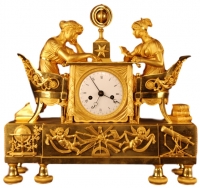