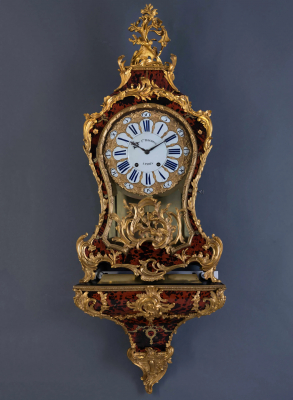 Spring driven Movement with rectangular plates and knotted pillars with a running time of eight days, rare early tic-tac anchor element and a pendulum with silk suspension, half-hour striking mechanism by means a locking disc on a bell.

Case lined with tortoiseshell and brass inlays. The whole is provided with beautiful cast and hammered fire gilt bronze ornaments. Glass panels on the front and sides, with a matching Ojief-shaped console. The back of the case is signed with maker's mark ANT FOVLLET

Antoine Foullet was a well-known furniture maker. He became master on February 17, 1749 and died on September 24, 1775. He not only made clock cases, but also has some very important pieces of furniture to his name. For example, there is a Commode Transition in the National Museum of Stockholm. There are also similar pieces of furniture made by his son Piere Antoine Foullet, from which it is concluded that they probably worked together for some time. If not, Piere Antoine was at least inspired by the works of his father. There is a box by Antoine himself in the world famous Wallace Collection in London, also covered with tortoise shell and provided with fire-gilded bronze. 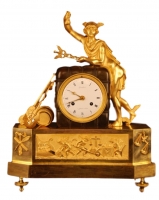 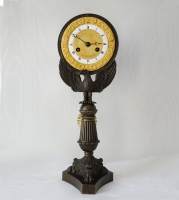 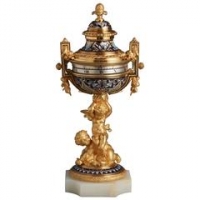