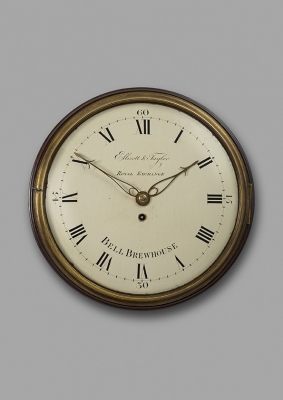 Fine made wall clock probably made for the Bell Brewhouse.
The 12 inch convex wooden dial retains its original craquelure finish and is signed ‘Ellicott & Taylor, Royal Exchange’ below the XII and ‘BELL BREWHOUSE’ written above the VI.

The elegant pierced hands and moulded brass bezel retain their original gilding.
The fusee movement, with anchor escapement, has a duration of one week.
Date: circa 1815. Diameter: 15 in (38 cm).
Price

The makers
Ellicott & Taylor are recorded as working in the City of London between 1811 and 1830.

The Bell Brewhouse may refer to the Bell Brewhouse of Shoreditch High Street (nos. 134-135), which had been in use as a brew house since 1617 – the brewhouse was used by a succession of brewers until sometime after 1811 – in 1817 it was occupied by an ironmonger before becoming the Bell Inn, which continued in use as a public house until 1934. 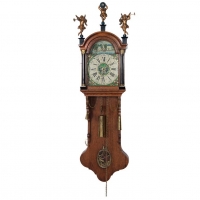