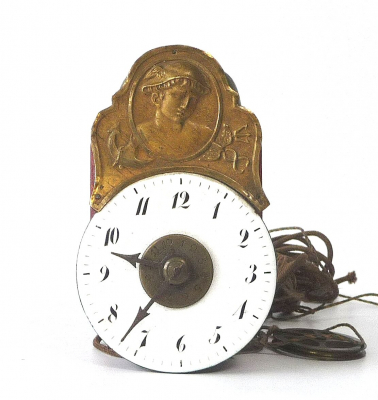 A miniature Black Forest ’Sorg’ wall clock, depicting Hermes, circa 1830
This clock or socalled ‘Schwarzwalder Sorg Uhr’ has an enamel dial with Roman numerals. The hands are blued and a brass alarm disc is with hour-numbers engraved. The case is made of wood – Holzgespinndelt - and has doors to the sides and hangs on the wall. The movement has wooden plates with brass bushes in which the axes run. It is being driven by a weight on a pulley and has a duration of a day. Clock with striking and alarm mechanism. It strikes the hours by means of a countwheel on a bell. It is being regulated by anchor escapement in combination with a pendulum. It is made by or in the tradition of Joseph Sorg of Neustadt in Germany. Hermes was among the twelve Olympian Gods and is considered the messenger of the gods, god of traders, travellers, and a guide to the Underworld. His symbols, are his winged sandals and helmet, caduceus -a staff entwined by snakes - and anchor. This clock still has the original sales box, in which a label, barely legible, says' petit horloge’. The whole is in original and unrestored condition.
HxWxD 9.5x6x7 cm. € 6.800, - 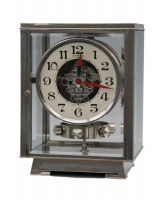 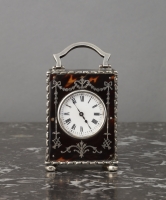