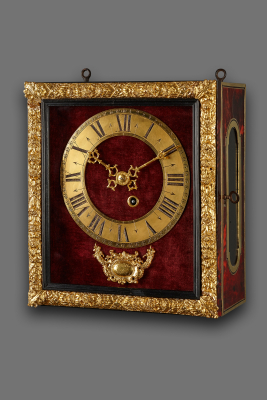 The Clockwork
A French Pendule Religieuse with brass platinum movement on horizontal spindle, pendulum and cycloidal arches with a two-day duration. The clockwork is equipped with striking on an escapement, striking a bell on the hours and half hours. The striking and moving mechanisms are driven by a single spring in a main barrel. The signature Jacques Hory AParis is engraved on the rear plate.
The iron frontal plate of this Religieuse is covered with red velvet. Attached to it is the ormolu chapter ring, which features engraved and black painted digits. The hours are indicated by Roman numerals, with embellishments for the half-hour markings between them. The minutes are indicated by Arabic numerals. The round-cut and engraved hour and minute hands are of ormolu brass. Below the chapter ring, an ormolu brass shield with the engraved signature Jacques Hory AParis.

The Case
The walnut case of this Religieuse is veneered with ebony and tortoiseshell. The case has a door on both the front and rear; the front door is framed by gilt bronze leaf motifs. Both sides of the case feature a window surrounded by a brass frame.

The history of the first French spring-driven clocks, the so-called “Pendule Religeuse”, began in 1658, when Salomon Coster's clocks first appeared in Paris and in The Hague. They clocks were closely related to the Dutch models in terms of clockwork and appearance. The early specimens had going and striking trains that were driven by just one spring barrel. The cases were simple and without much adornment. Tortoiseshell was often used, which gave the clocks a luxurious appearance. The Dutch counterparts were generally very austere and modest, mostly in ebony-veneered cases with or without tortoiseshell.
The French models gradually developed into a more exuberant style with an abundance of gilt-bronze frames and inlays in the so-called Boulle technique. " 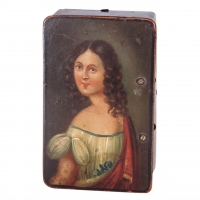 A French musical cylindre box with a polychrome painted port...

A mahogany French stick barometer, by Mossy, circa 1790.