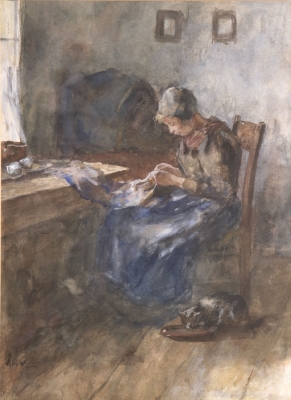 JS Henry Beetle Amsterdam 1854 - 1922 Laren (NH) Jacob Simon Hendrik Kever was born on 19 June 1854 in Amsterdam. Henry already showed talent. He came through Isaac Israels at a training center at the studio of PF Greive. Where he remained until Greive died in 1878.

Henry Beetle was resp. student at the Amsterdam Academy (1969-1872) conducted by PF Greive, Henry Beetle painted throughout his life, especially in houses with figures, still life and flower, and also a single cityscape. In 1887 he made a few etchings and became a member of "Arti et Amicitiae 'in Amsterdam.

Beetle has worked in Amsterdam, Laren, Blaricum, Nunspeet and Brabant. He settled in the Gooi: First in Blaricum and later, after 1905 in Laren, where he gave advice and guidance of Anton Mauve and joined the Laren School. For the winter, he is still a studio in Amsterdam.

She became known for his loose key in harmonious colors and interiors with painted figures, farmers and children. They admired it the atmosphere, lighting and colors, such as the special green of the grass. Museums, such Stedelijk Museum in Amsterdam and the Hague Municipal Museum in Laren Singer 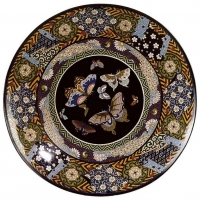 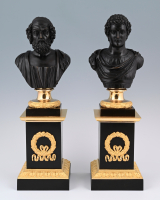 A pair of Empire bustes.

Won't exist because of you