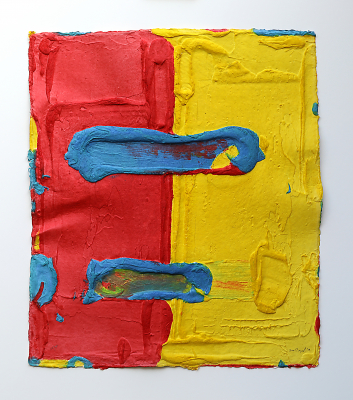 Following his education Bogart took a job with an advertising concern in Rotterdam. Subsequent to World War Two the then twenty-five-year-old painter settled in Paris, France where he was among the founders of Art Informel. At first he experimented with cubism and figurative drawing, depicting flowers, still life and self-portraits. In the 1950s he began to concentrate on working with impasto. With thick layers of boldly applied and colourful paint, he developed an expressionist style which became more abstract with time.[4]
In 1961 he and his later to be wife Leni permanently relocated to Belgium and in 1969 he became a Belgian citizen. Here he began to experiment with a more three-dimensional medium, a mix of mortar, siccative, powdered chalk, varnish, and raw pigment, applied to large, heavy wooden backing structures.[5][6]
Bogart exhibited frequently in Antwerp and Ghent. In 1971 he represented Belgium at the Venice Biennale.[7]
In 2011 the Bogart presented an exhibition in celebration of his 90th birthday, a display of his Monochrome paintings, held at the Bernard Jacobson Gallery in London. A retrospective of his work was also exhibited at Galerie Jean-Luc and Takako Richard in Paris. Bogart died May 2, 2012 in Sint-Truiden, Belgium at the age of 90. 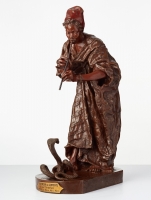 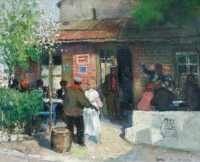 Company at a cafe