A magnificent and very rare early 18th century first state Dutch celestial table globe produced by Gerard Valk (or Gerrit Leendertsz Valck) (1652-1726) and Leonard Valk (1675-1746). Made up of a set of beautiful original hand colored, copper engraved gores. With a (wooden) horizon ring (a circular band of printed paper glued to wood, wrapping around the equatorial area of a globe, and generally containing calendar or zodiacal information.);

A highly unusual two pointer brass hour ring (a small, thin metal circle on the top of a globe, divided into 24 segments and imprinted or engraved with the hours of the day and night. By turning it, one can calculate the time difference between various locations on the globe); a graduated brass meridian ring (a semi-circular band, usually metal, arcing around the globe and passing over, or attached to, the poles. A semi-circular meridian is called a half meridian; a complete circle, a full meridian); with four rosewood veneered fluted table legs complete with circular, turned ebony feet; resting on sturdy cross-stretchers; an ebonized central stand; a base consisting of beautiful circular rings of segmented rosewood and ebonized pear, inset with alternate concentric circles of an ornate and pleasing floral design.

Established at the end of the seventeenth century by Gerard Valk, and assisted by his son Leonard, the family firm became the only publisher of globes in the Netherlands in the 18th century. Initially an engraver and art dealer, and having worked for map-sellers Christopher Browne and David Loggan in London between 1672 and 1679, Valk established the firm in Amsterdam in 1687. In Amsterdam Gerard began his publishing firm producing maps and atlases in co-operation with Petrus Schenk about 1680. Initially, they published maps and atlases, but in 1700 the company moved the shop to the building previously occupied by map and globe-maker Jodocus Hondius. The cartography of his globes, as stated on cartouches, was based closely on the celestial atlas Uranographia, published in 1687 by the celebrated Polish astronomer Johannes Hevelius (1611-1687). In 1701, Valk applied for a charter for making globes and the "Planetolabium", designed by Lotharius Zumbach de Coesfelt (1661-1727), an astronomy lecturer at Leiden University. It was about 30 years after Gerard Valk started his business, that he began to publish globes with his son. The Valks produced several editions of 3, 6, 9, 12, 15, 18 and 24-inch diameter terrestrial and celestial globes.

What is a Celestial Globe?
A celestial globe is a globe of the stars and constellation. They are mapped onto a sphere to show how they appear in the night sky from the earth, as if the earth were in the centre of the sphere. Given this point of view, the constellation figures are rendered differently from those on a star map: they are usually reversed and drawn as if we were viewing them from the back, from some imaginary point in the cosmos beyond the earth and stars.

Legends
Title, in a simple oval cartouche, printed on a separate piece of paper and pasted below Cetus.

Uranographia, showing a most accurate depiction of the constellations and of the conspicious stars in the individual constellations, which is adapted from the observations of the matchless astronomer Johannes Hevelius for the end of the year 1700. Moreover, by a new method invented by Lotharius Zumbach, Doctor of Medicine and a famous mathmatician, the horizon at the meridian of Amsterdam is added, showing accurately for more than 200 years the syzygies of the moon, as well as the common years and the bissextiles. By the labour and enthusiasm of Gerard and Leonard Valk from Amsterdam, 1715. With privilege.

Dedication
A leaf encircled cartouche (between Hydra and Argo.)

To Johannes Trip, J.U.D., a man noteworthy for is most splendid deserts and for the brilliance of his virtues, the most eminent consul of the State of Amsterdam, the incorruptible director of the East India Company, most upright Lord of Berkenrode, etc., the Uranographia is given and dedicated with equal reverence, by Gerhard and Leonard Valk.

Cartography
Complete with the Equator, the tropics, the polar circles, a half equinoctial colure, a half circle of declination through 30 degrees. Ecliptic, circles and parallels of latitude every 5 degrees. The equator and ecliptic are graduated. The stars / constellations are represented as their figures, and their names are displayed in Latin. There is a legend that is crowned by the sun. There is an attractive “Sextans Uraniae” situated just below “Leo.”

Names associated with figures from mythology were given to a number of prominent constellations. These include most of the members of the Perseus family (Perseus, Andromeda, Cassiopeia, Cetus, Cepheus, Pegasus, and Auriga), Hercules family (Hercules, Sagitta, Aquila, Lyra, Cygnus, Hydra, Crater, Corvus, Ophiuchus, Serpens, Centaurus, Lupus, Corona Australis, and Ara), Orion family (Orion, Canis Major, Canis Minor, Lepus, Monoceros), Zodiac family (Aries, Taurus, Gemini, Cancer, Leo, Virgo, Libra, Scorpius, Sagittarius, Capricornus, Aquarius, Pisces), and Ursa Major family (Ursa Major, Ursa Minor, Draco, Canes Venatici, Boötes, and Corona Borealis).
Most of the modern constellations that were not catalogued by Ptolemy were created between the 16th and 19th centuries. Many of them were unknown to the Greeks because they lie in the far southern sky and are invisible from mid-northern latitudes.
Twelve constellations were created by Dutch explorers who sailed to Indonesia in 1595. They were named after the animals the explorers encountered on their journeys. These constellations were first depicted on a celestial globe designed by the Dutch-Flemish astronomer Petrus Plancius in 1597/1598.

They include:
Apus (the Bird of Paradise)
Chamaeleon
Dorado (the Dolphinfish or Swordfish)
Grus (the Crane)
Tucana (the Toucan)
Volans (the Flying Fish)
Musca (the Fly)

The Polish astronomer Johannes Hevelius added 10 new constellations in the 17th century. Seven of these are still in use:
Canes Venatici (the Hunting Dogs)
Lacerta (the Lizard)
Leo Minor (the Smaller Lion)
Lynx
Scutum (the Shield)
Sextans (the Sextant)
Vulpecula (the Little Fox)

Known examples around the World:
Other editions of first state 18-inch diameter celestial globes are known worldwide, though it is highly unlikely they will appear on the art market. Only one is currently in a private collection; the remainder is part of collections of institutions and museums worldwide.

Conclusion
This magnificent celestial globe, in its first edition, is a rare find. The makers, Gerard Valk and his son Leonard, were the only significant publishers of globes in the Netherlands during the 18th Century, enjoying an almost total monopoly in the first half of the 1700's. The Dutch have never been surpassed in their lavish designs and their eye for detail in globe making. Gerard and Leonard Valk continued this wonderful tradition of the Dutch ‘golden age’ of wonder, (approximately from the 1590s until the 1670s) from a clutch of famous 17th century predecessors like Blaeu, Van Langren, Hondius and Van Keulen. Globes of this age and magnificence are always sought after. It is a gorgeous and superb testament to the globe maker’s art and technical skill from over three hundred years ago.

Condition
This globe is in fine condition, with no major facsimile work done. There is, however, an old dent to the globe, and some minor damage to the zodiac or horizon ring, with some small loss. Furthermore, there is a little cracking and unevenness or bubbling to the ring. The coloring is fine and original, as has a lovely looking ‘aged patina’. The celestial figures are finely engraved and rendered in truly glorious and eye-catching detail, including some faint gold embossing to the stars and some constellations, and to the decorative sextant. 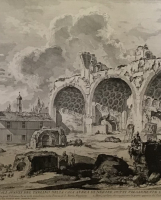 Piranesi: The Basilica of Constantine 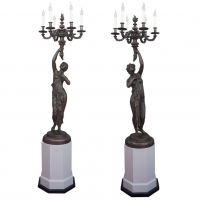 A pair of candlesticks adapted for electricity, circa 1880