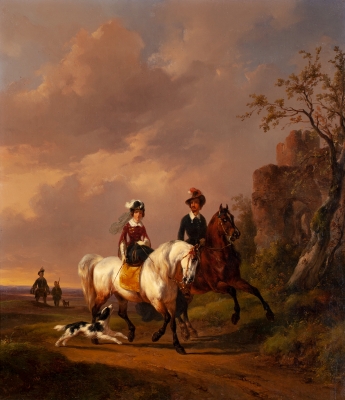 Wouterus Verschuur belongs to the last generation of Dutch Romantic animal painters. He was renowned for his paintings of horses since 1840. His biggest inspiration was Philips Wouwerman (1619-1668), the seventeenth century painter of horses. Verschuur truly mastered the skills for depicting a lifelike horse and his rendition of the breed and the stance of the horse were impeccable. The horse takes a central place in his compositions which is also the case with this painting depicting the falconry.

Verschuur was not only famous in the Netherlands, but also abroad. In 1855 Napoleon III (1808-1873) bought one of Verschuur’s submitted paintings during the World Exhibition in Paris. Furthermore, Verschuur sometimes collaborated with Cornelis Springer (1817-1891), the famous Dutch landscape artist.

Homewards at sunset near Noorden 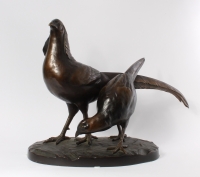 A pair of pheasants, patinated bronze by Julius Schmidt Fell...

Man, woman and child on a path near farmhouses