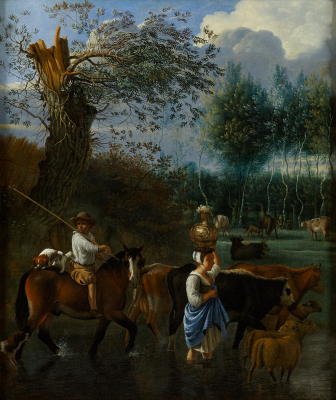 Jan Siberechts was a Flemish painter who was born in Antwerp. During the 1660s, the artist developed a very personal style of landscape painting, of which this work is a fine example.
The main theme of Siberecht’s oeuvre became the Flemish countryside with its streams and cattle. A peasant woman wading with a jug on her head is seldomly absent in his compositions. Willows grow along every brook and sometimes horses and carts are shown wading through the water. The painter used this staffage in his landscapes to play with the visual effects of figures and animals in water. Not only their reflection, but also the water’s motion and splashing were masterfully rendered by him.

The Second Duke of Buckingham, George Villiers, was very impressed by Siberechts when he visited Antwerp in 1672. Upon the Duke’s request, the painter emigrated to England where he also completed various assignments for aristocratic clients. Siberechts presumably died in London in 1703. However, in his 1706 biography of the artist’s life, Fokker states that Siberechts had died three years earlier and was buried in London. Evidence for this has never been found in funeral records. It has therefore been suggested that the painter may have returned to his native Antwerp at a later age.

The Statens Museum in Copenhagen owns a painting with an interior scene by Jan Siberechts. In this work, which is also dated 1671, a larger version of our painting hangs above the fireplace. 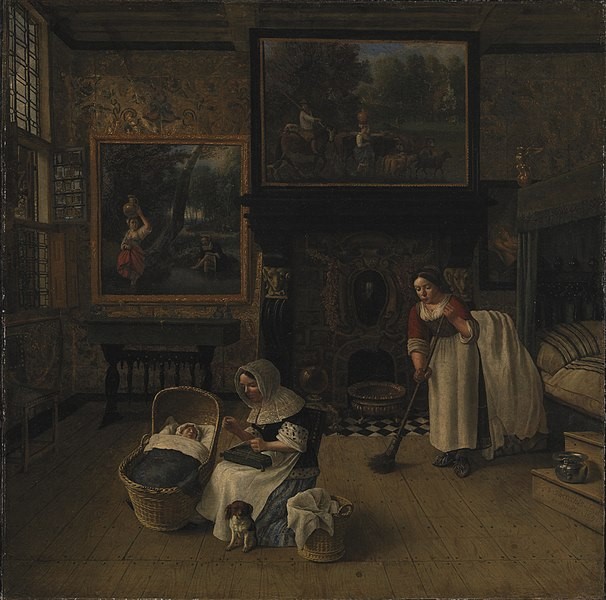 Especially the positioning of the figures and animals in the stream are strikingly similar. There is another painting that closely resembles this landscape wherein only the tree on the left deviates. Due to its great resemblance of the pieces, the provenance of that painting was mixed up in Fokker's monograph. The New York Loevenich provenance listed under our painting actually refers to the other version, which is a bit smaller in size.

Siberechts often repeated various motifs in his compositions. This suggests that he used a limited number of sketches, which formed the main models for his compositions. Only a few such sketches, of trees in particular, have survived the hands of time.