Johan Dijkstra is considered one of the most important artists of ‘De Ploeg’ in Groningen. With Jan Altink, Jan Wiegers and George Martens he founded the artist association in 1918 to organize exhibitions of modern art and show artists and public the latest developments in art, architecture and literature. Around Jan Wiegers formed a group of Ploeg-painters who found their inspiration in expressionism. Wiegers brought the modern style back to the Netherlands in 1921 after his stay in Switzerland with Ernst Ludwig Kirchner. De Ploeg artists began to experiment with colour, wax paint and expressive form. Johan Dijkstra was educated in Groningen and at the Rijksacademie Amsterdam, and initially earned his living by making illustrations and advertising work. Dijkstra also experimented with colour and technique after Wiegers’ return. He was influenced by French and Flemish artists, whose work he saw at Pictura-exhibitions, and the work of Vincent van Gogh inspired him. At the end of the twenties, the expressionist influence diminished.Landschap met korenveld 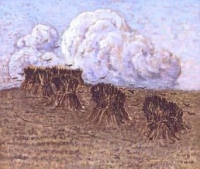