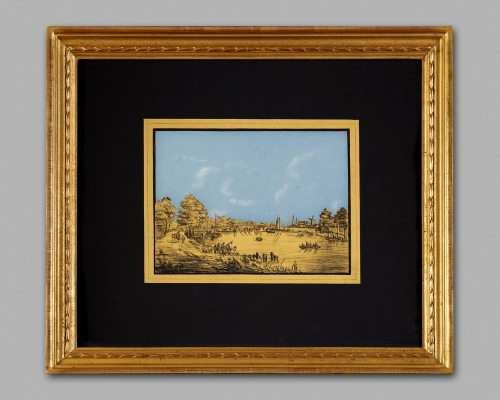 In a black passe-partout with a narrow goldleaf frame, a depiction of the “Hoge Brug” (high bridge) over the river Amstel in Amsterdam.
On the left, the path allong the river and a house surrounded by trees. On the path some figures and animals and on the landing some fishermen. On the river various craft, some of them moored.
The bridge has numerous arches. On the left in front of the arches, some houses and landings. On the right a path with some houses and foliage. Behind the bridge we can see the spires of the “Zuiderkerk”, the “Oude Kerk” and a windmill. The depiction gives an aerial view with a low horizon and lots of blue sky and the impression of clouds.
The bridge can be identified as the historical 17th century “Hoge Sluisbrug” that was positioned at the nowadays Sarphatistraat. The bridge was replaced in 1883.
The picture is made in mixed techniques. The reverse mirror painting, that is characterised by the fact that the representation is built up from the foreground to the back (instead of the usual back-to-front). The verre églomisé-technique to mount the gold-leaf shapes with the help of gelatine or albumen. On this opaque surface the mirrored depiction was transferred. Subsequently it was engraved with a needle. The lines now visible from the front were filled with black paint on the back to enhance the contract of the picture. 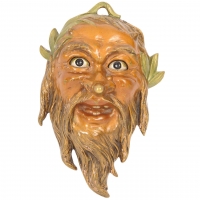