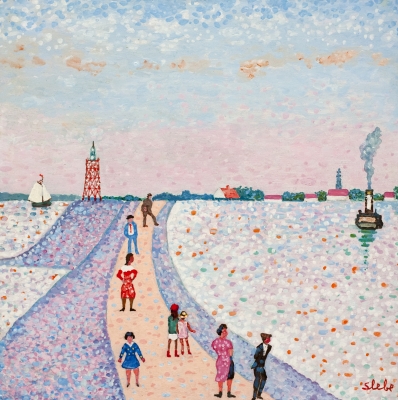 Ferry Sleebe was born May 3, 1907 to office - Almelo and died on March 15, 1994 in The Hague. He was born Ferdinand Joseph Sleebe. Said that a mistake of his father and changed his name to Sleebe. His nickname was Sleebe Ferry. He signed his work is always Sleebe.
Trained in 1923/25 on the evening of the Royal Academy of Arts in The Hague where Yahoo Ingenhousz Bon, Henk Meijer and Cornelis Role his teachers were and in 1933 the Netherlands Free Studio led by Christiaan de Moor and François Erdély . In 1948 he joined the "The Equipe ', Hague a group of 10 artists at a free college teaching. Belonged in the fifties to Voorburg Group, the new artistic team. Was a member of the Hague Art Circle, Pulchri Studio, Verve and Posthoorn Group.

Gave the teacher teaches at the Vrije Academie in The Hague from 1953 to 1955.

Traveled to France, Belgium and Spain.

Ferry Sleebe was an artist who himself like a 'little master' said. More than once he played borrows from the giants he admired: Van Dongen, Matisse, Dali. But he did so in its own way.
He took their pictures, themes and examples, but this completely integrated in his own typical style. In addition, he copied himself continually: his monkey with the banjo, harlequins and gramophone walking stroller with a red thread through his hundreds of works. Above all, he has become known for its bright, colorful and often surreal paintings. Nudes were his favorite themes, but also street scenes, still lifes and all kinds of animals form their own stories. Eventually he developed into a miniaturist of size. 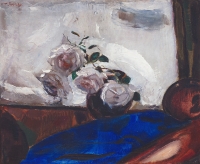 Still life with roses and a blue background