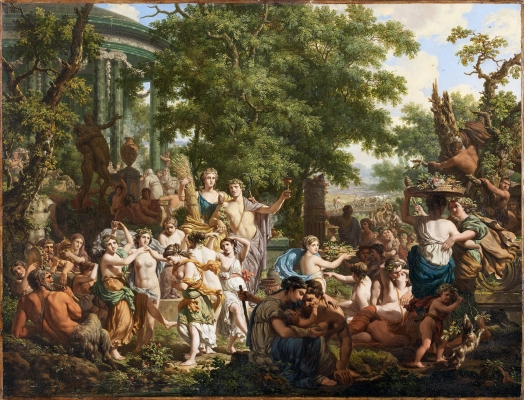 The Dutch artist with the French name Jean Grandjean is relatively unknown.  Dictionaries of art mention him only briefly as a draughtsman of whom only a few paintings are known. Only Van Eynden and Van der Willigen, in the early nineteenth century, are extensive in describing the artist.
In the 1970´s the Rijksmuseum paid attention to Grandjean in an exhibition on artists travelling  to Italy, Shortly after this groundbreaking exhibition a large portfolio with academic studies by Jean Grandjean was discovered. The director of the Rijksprentenkabinet J.W. Niemeijer published this album in Master Drawings in 1974. He mentions in his article on the artist that paintings by Grandjean can be counted on the fingers of one hand. More than 40 years later little has changed. The number of known pictures is still very small.

Jean Grandjean was, despite his French name, born in Amsterdam. His father was a descendant of French Huguenot refugees. He was a glove maker who married twice. His second marriage brought him six children of whom Jean was born on February 5, 1752.
Jean showed his talent already at an early age and was apprenticed to the topographical draughtsman Jacobus Verstegen. Soon Jean outgrew his master’s talents. Jean’s father displayed the drawings of his son in the window of his shop. This attracted commissions from Amsterdam collectors. In this period Jean was working in the studio of the enamellist De Groot. The simple decorative type of work brought him no satisfaction.

In the summer of 1772 he was able to enter the studio of Jurriaan Andriessen, (1742-1819). This painter was famous for his good educational gifts. Many of the better artists in the second half of the eighteenth century made their start in this studio. Among them not only Andriessen’s brothers Anthony (1746-1813) and his son Christiaan (1775-1846) but also Hermanus Numan (1744-1820), Hendrik Voogd(1768-1839) and Daniel Dupré (1751-1817).  In the Andriessen workshop Jean was trained to paint Arcadian landscapes and painted wallpapers (behangselschilderijen). Jurriaan Andriessen also gave courses at the Amsterdam City Drawing Academy since 1766. Jean Grandjean’s name was listed there for the first time in 1771. Not long afterwards he won the prize of honor three times. He also practiced at a private drawing school, probably one set up by artists to lower costs. Grandjean attached special significance to this extra training in drawing from life models. His ambitions were far-reaching.  He wanted to become a history painter. The neo classical movement under the influence of for example Johann Joachim Winckelmann (1717-1768) was of great importance for the art theory and development of taste in the Netherlands in the 1760’s and 70’s. Lectures at the Amsterdam Academy were often dedicated to classical themes. A certain preference for Greek antiquity came into vogue in art loving circles. It is clear that Jean Grandjean was greatly influenced by this mode.  In 1777 the artist was one of the founding members of the Artists’ Society Felix Meritis.
The art lovers, amateur draftsmen and collectors Jan Tersteeg (1750-1808) and  Dirk Versteegh (1751-1822) stimulated Jean Grandjean to paint history pieces. These paintings and drawings were ordered by them for their collections. The role these peers played in suggesting subjects, discussing taste while participating in drawing lessons must have been very important for Grandjean. With help from others in their circle of collectors, they made it financially possible for Grandjean to travel to Rome. He arrived in the eternal city in the summer of 1779. He resumed his practice of drawing after the live model in the so-called Trippelsche Akademie, named after the sculptor Alexander Trippel (1744-1793). Here among mostly German colleagues as Wilhelm Tischbein (1751-1829) and Franz Kobell (1749-1822) his drawing style developed rapidly to a more international style. His sudden death in November 1781 robbed Holland of an artist who might have become her greatest exponent of Neo classicism.

The importance of Jean Grandjean’s travel to Rome must not be underestimated. He was the first Dutchman in over 50 years to go to Italy after Pope Clement XI withdrew the freedom of congregation for the Dutch painters in Rome in 1720. Many others followed in his footsteps, among them Daniel Dupré(1751-1817) and Hendrik Voogd(1768-1839) and in the early nineteenth century Josephus Augustus Knip (1777-1847). His portrait was put up in the Drawing room of Felix Meritis as can be seen on the painting by Adriaan de Lelie(1755-1820) from 1801 of this room in Felix Meritis (Rijksmuseum Amsterdam, inv. no. SK-C-538).

Celebration of Spring
This picture of a feast with the goddess Ceres, a young Bacchus,  nymphs and fauns in an Arcadian landscape celebrating the spring is typical for the oeuvre of Jean Grandjean before his journey to Rome. Theme, composition, manner of painting use of color all are closely related to the pictures of his teacher Jurriaan Andriessen. The painting resembles a  water-color in the Rijksmuseum  (see image on the left), An Arcadian Landscape with a temple in the background. Both the drawing and the painting were once in the collection of Jan Tersteeg. The description of the painting in the auction catalogue of 1808 gives an insight in the specific subject which is chosen here. The landscape where the young Bacchus and Goddess Ceres are celebrating is called Enna. This was in Greek mythology the capital of Sicily, famous for her Demeter cult. Demeter, otherwise known as Ceres, was the sister of Zeus.She had a daughter, Persephone, or Proserpine to the Romans, who was the maiden of Spring.lusted after Persephone.His obsession compelled him to drag her down to the underworld.searched in vain for her lost daughter.Her reproach to the cruel world was to withhold the bounties of the harvest.Demeter discovered the whereabouts of her daughter and pleaded with Zeus for her safe return.arranged a compromise: she would spend half the year in the sunlit uplands and half in the kingdom of Hades. As a result we know the seasons. When Persephone is with her mother it becomes spring, when she returns to Hades it will be winter. In this painting by Grandjean we see how Persephone returns from the underworld and is welcomed by her mother Ceres in spring. In the background farmers are ploughing the fertile grounds. The celebration of Spring is an important rediscovery of a rare painting by Jean Grandjean. 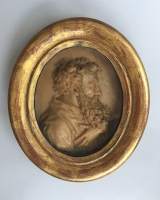