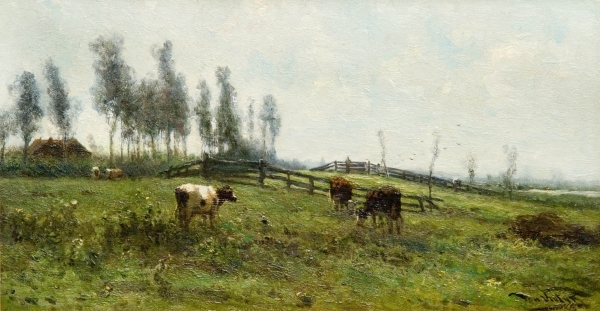 Johannes Martinus (Jan) Vrolijk 1845-1894 Vrolijk was born in The Hague in 1846. He was a pupil of Van den Berg, J. Ph. Koelman and Peter Storenbeker. He was awarded medals at Arti (Royal Bronze) 1879; Zutphen (Gold) 1881; Amsterdam (Honorable Mention) 1883; South Kennsington (Bronze) 1874; Berlin "Summer's Morning" (Gold) 1888; Chicago World's Fair "Summer's Evening" 1893. Vrolijk had a long association with The Pulchri Studio (The Hague), and held the position of Commissioner of the Pulchri Art Department.


"Our King (The Netherlands) was a great admirer of Vrolijk's works. He gave him the order of the Eikenkroon in 1888 in honour of a picture entitled: "Behind the Farmhouse," which was afterwards bought by H. M. Later, in 1891, this same canvas was sent to the Berlin Exhibition by permission of the Queen Regent. It attracted universal attention and was especially noticed by the Emperor, to whom Vrolijk was presented, with his two friends Elch. Verveer and W. Martens, by the artist Mesdag. It is said that Emperor William is so fond of this above named picture that he has it removed from palace to palace as he changes residences. At this same exhibition in Berlin there was another picture by Vrolijk called: "A Summer's Morning." In the foreground we see cows standing in the water drinking, the sun shining upon the meadows in the distance with myriad tints and tones. A soft etherial atmosphere pervades the whole. For his picture Vrolijk was given the big gold medal. As a pendant to the "Summer's Morning" Vrolijk painter a "Summer's Evening." It was taken from the neighbourhood of Ryswyk. This picture went to the World's Fair at Chicago. His success in the States was so great that all his exhibited pictures were sold and he received many orders for more."
Dutch Painters of the 19th Century, Max Rooses (1900) 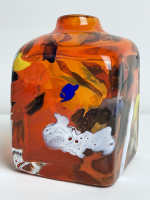